Ellen Waterston is a literary arts advocate and award winning poet and author. Hotel Domilocos, her fourth book of poetry, will be released April of 2017. In 2015 Waterston converted her third collection, the verse novel Vía Láctea: A Woman of a Certain Age Walks the Camino, to a libretto which premiered as a full-length opera in 2016 and is slated for a second staging this year. Her poetry has appeared in numerous jou 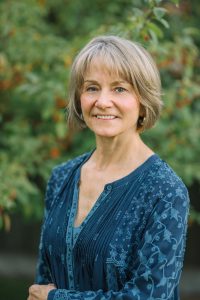 rnals and anthologies and she is twice a WILLA Award Winner in Poetry and the winner of the Obsidian Prize in Poetry. She is currently nominated for a Pushcart Prize in Poetry. Prose titles include Where the Crooked River Rises, a collection of Waterston’s award-winning essays, and a memoir, Then There Was No Mountain, rated one of the top ten books of 2003 by the Oregonian and a WILLA and Foreword finalist. Her poetry and prose have garnered many grants, fellowships and residencies, including from Oregon Arts Commission, Literary Arts, Fishtrap, Ucross, Caldera, Atlantic Center for the Arts and the Sitka Center. After eleven years as founder/director of The Nature of Words, a literary arts nonprofit, she passed the baton in 2012 to focus on the Writing Ranch, the Waterston Desert Writing Prize and her writing. Founded by Waterston in 2000, the Writing Ranch offers writing workshops and retreats for emerging and established writers. The Waterston Desert Writing Prize, established in 2014, is awarded annually to nonfiction projects concerning deserts anywhere in the world. Waterston is at work on a nonfiction book for the University of Washington Press examining land use issues in the high desert.  www.writingranch.com